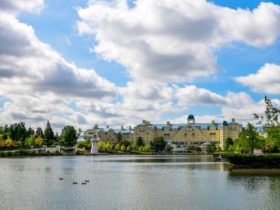 Now that you know more about the technical data of the hotel, I will give you a pictorial tour of this flagship Disneyland Paris hotel.

The Disneyland Hotel is a magical gateway to Disneyland Park. It is located between Main Street Station and Fantasia Gardens, which serves as the gardens, promenade and entrance to the theme park.

It is a majestic 5-star hotel in the Victorian style of the 1890s. It is the star of the resort’s seven hotels, representing luxury in the heart of magic.

The other hotels in the park did not have this privilege, and it is the work of the architects of Walt Disney Imagineering as well as architect Dana Aiken and the firm of Wimberley Allison Tong & Goo.

The hotel consists of three buildings: the central building, an east wing and a west wing (both U-shaped), all connected by walkways. The buildings are covered with a fairly strong rosewood coloured roof, enhanced by several octagonal turrets.

In order to stand out better against the European sky, it was decided that the facades would be pink, just like Sleeping Beauty’s castle.

At the top of the central building, there is one of the unmistakable symbols of this hotel: a clock with Mickey in its centre whose hands have been personified by his arms which tell us the time. Under this same building, on the ground floor, there are 64 ticket offices. They allow visitors to buy their tickets for the park(s), as well as two shops attached to the hotel.

The Disneyland Hotel, the rooms.

The hotel occupies the upper floors from the first to the fourth. It consists of 496 rooms and 18 suites. The standard rooms are 34 m² and the suites range in size from 54 m² to 187 m².

Very few rooms have a view of the park. This opportunity is reserved for the top two floors of the central building, which consist mainly of suites and nine rooms.

The two most prestigious suites are :

The hotel also offers a wide range of services.

Within the hotel there is also an indoor swimming pool, a fitness and relaxation area with jacuzzi and hammam, a massage service on request, a gym and a garden, all located in the west wing. Since 2007, the Celestia Spa has been offering treatments and massages using Carita products (fee payable and by appointment). The area has been private for hotel residents since the opening of the second park in 2002.

While parents relax, children also have their own space: the Minnie Club welcomes them with the services of an animator depending on the day of your visit, a television corner and colouring workshops. For the older children, the Mad Hatter’s Game Arcade is available (for a fee).

When it comes to shopping, we are not left out: the hotel has a 90 m² shop called the Mickey Gallery located on the garden side in the south-east part of the building.

There are also the Plaza East and Plaza West shops located on either side of the entrance counters on the ground floor of the building. They are only accessible from the outside.

And finally, if you want to mix business with pleasure during your business trips or seminars, for example, the hotel offers meeting rooms (for a fee):

Did I make you want to book? Unfortunately, you’ll have to wait… The hotel is currently being renovated for an indefinite period of time.

Are you curious to see how the work is progressing? I suggest you put yourself in the shoes of a little mouse to discover the new facilities planned for this majestic hotel:

It is true that at this point, access to the dream is a luxury that not everyone can afford. But I am sure that the reunion with this mythical hotel promises to be even more refined and sparkling, which certifies a truly unique experience with the incomparable Disney hospitality.